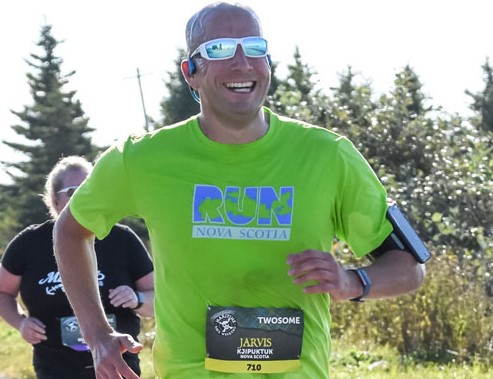 He has extensive engagement experience with First Nations communities and organizations, mainly in health and education. He has spoken and presented at many events, including Dalhousie Law School and Dalhousie Medical School, and led the development of the Donald Marshall Junior Memorial Award. He also possesses knowledge on Indigenous law, and Mi’kmaw history, culture, and language, often acting as a cultural language resource and liaison, and he has been recognized as a youth leader by numerous organizations and committees.

An on-again off-again runner most of his life, he got involved in racing in 2016 after his friend Erica suggested that they do the Bluenose 10K together. After that, he hasn’t stopped. He has participated in countless races, usually as a runner and an occasional volunteer. In 2019, he became a member of the Run Nova Scotia Management Board (Member at Large).

He lives in Kjipuktuk/Dartmouth with his wife Kerrianne.