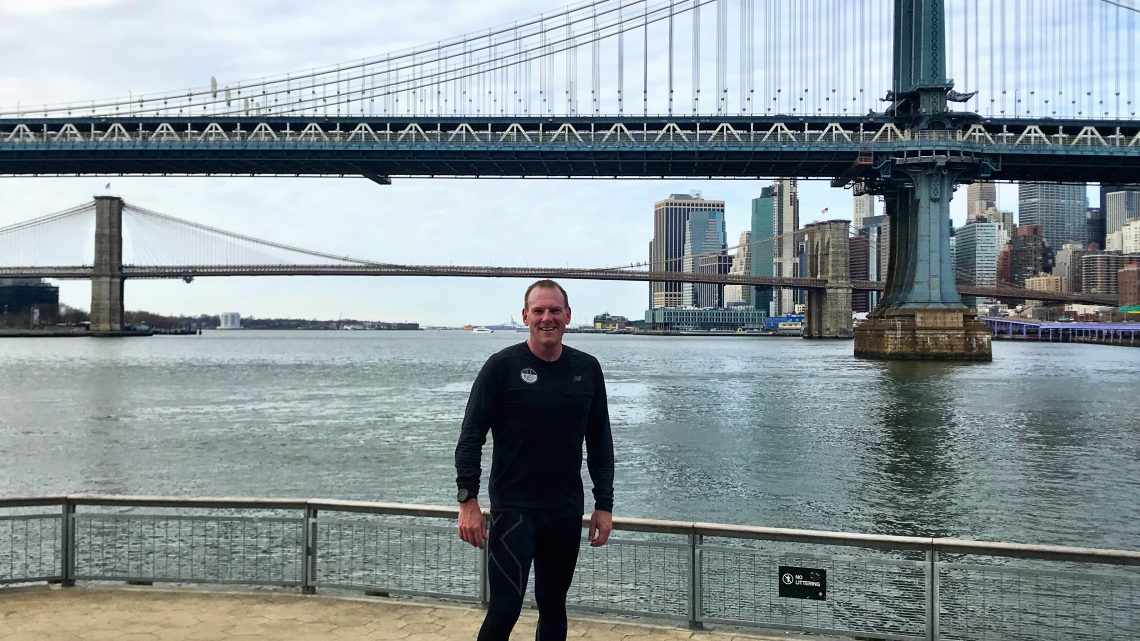 It was a race I’d wanted to do for years. The United Airlines New York City Half Marathon. I’ve been to New York a couple dozen times or more over the past twenty years. I love the city. I love running in the city. This year an opportunity came along to do the half and I planned everything around it. But it wasn’t to be. COVID-19 hit the world. A week after the cancelled race date so much has happened in the world it seems odd to even think about it. Seems like years ago. But here we are.

Races fell like dominoes. A week before the scheduled event I’d run a quarter marathon race in Mexico. It went well. New York Road Runners sent out an e-mail assuring runners the New York race was still on, with some extra precautions. Then the virus seemed to suddenly gallop around the world. Cases showed up in New York. Then the dreaded e-mail cancelling the race.

I’d spend hours watching race footage from the previous year. Studying temperature and wind charts from previous races. Visualizing every turn of the race and more. Even visualizing the subway ride to the start. I knew what I’d put in the bag for the finish line. I visualized the moment of seeing friends finish. To say the cancellation was a disappointment was an understatement. It was a crushing blow. I’d continued my training in Mexico, and felt I was just about ready in terms of peaking time.

For the first few days following the cancellation it seemed the race had been halted more because the logistics of emergency services and volunteer mobilization became too difficult at a time when other parts of the city might need support. With that, many people I knew still planned to go to the city. Hotels, theatre tickets, and flights were already booked. Why cancel?  A local group of New York runners said they would organize a virtual run on the Hudson River Parkway called the Viral NYC Half. My friend Meaghan said she was still coming to town with her sister, and we decided we’d either join that group or run a route in Central Park finishing our New York virtual half marathon. It wasn’t what was planned, but it was still New York. We’d earn that medal in New York City. It would be fun.

Then things escalated, almost as if overnight. Flights were being cancelled, Broadway shut down. Friends were no longer coming to New York City. Even people who had already checked in for their flights were cancelling as the gravity of COVID-19 became rapidly apparent.

Another disappointment as it became obvious I was the only one left. As people started talking about their worries, I oddly imagined myself in a scene from I Am Legend.

It wasn’t entirely by choice that I still ended up in New York City by this point. I did try to change my travel so I could go straight home. I was traveling from Mexico on multiple airlines and, between flight cancellations and skyrocketing prices, I could only shorten my stop over in New York, not eliminate it entirely. But things seemed fine, so I accepted the abbreviated stay. I do love New York City.

Then, as I arrived in New York the airline advised me my flight home from the Big Apple was cancelled. Another disappointment.

So what does one do when the airlines leave you in New York on the weekend of the half marathon you planned to run? You run your own half marathon of course.

I ate and slept and woke as though it was a race. Overnight I smashed my foot on the furniture in the ever so small New York hotel room (real runners are always losing toenails right, just not always BEFORE the race?). I hobbled around but by 6:30am Sunday morning I was up still headed for where the Viral Half organizers intended to meet in Harlem along the Hudson. But there was no one there. Another disappointment.

To be fair, by this point people were trying to practice social distancing. Even lineups at stores seemed more spread out than usual. People sat sections apart on a sparkling clean subway. I was one of a dozen or so people in my hotel, and you could literally walk through stores and not touch anyone. So the fact no one showed up didn’t really surprise me a lot. Though it was the faint hope of people being there for the start that still got me up in the morning to head out.

But I still ran. This was, after all, New York. And I was now well uptown.

Starting at the West Harlem Piers, the Hudson River Greenway opened up ahead of me. I took it easy, a fun run of sorts. I didn’t even think about time or pace. I just ran. Thinking about the places I passed, and my many visits to them over the years. Passing other runners and cyclists we all gave each other wide berths. There were people out, but this was not New York City busy by any means. I wondered how many of these people, many wearing jackets emblazoned with the logos of famous marathons from around the world, were running their own virtual NYC Half.

I passed cruise ships disembarking their passengers and crew from journeys to more exotic locations suddenly cut short. People playing tennis, soccer, and other sports in outdoor fields. I snickered to myself as I passed a turn off sign that said “Meat Market”, knowing of course that was really for the Meat Packing District, which these days is anything but.

Each time I ducked out onto a pier, I was closer to the Statue of Liberty beckoning in the distance. New Jersey rolled by across the wind swept water. Kids on the end of the piers shielded themselves from the bitterly cold wind that seemed to vanish each time I ran back in. As I approached downtown, the Freedom Tower stood out ahead of me and I thought of all New York City has been through. And how this was just another in a long series of events which will mark time on the city timeline. As I turned through Battery Park I was surprised at the people lined up to take cruises out to the islands and wondered if these would be just a cruise, or whether the islands were even open. This was, of course, just days before a general state of emergency was called in New York.

Under the Brooklyn Bridge. The Manhattan Bridge. And then under the off ramps for the Manhattan Bridge – ramps I was supposed to have been racing on top of that morning. My watch told me I’d passed the half marathon mark. I put in a few hundred extra meters just to be sure and looked at the time. I hadn’t looked at it on the whole journey.

A personal best. By 20 seconds or so a personal best. And it didn’t even feel hard. How was that possible? Later I’d check the GPS and map data and sure enough there were no significant anomalies. All that disappointment from the race being cancelled. To friends not being around. To missing out on a Broadway show and food at my favourite restaurants. It all built up and released. Running, even on the coldest or wettest of days, is the mental release from the world when we need it most.

Running, even on the coldest or wettest of days, is the mental release from the world when we need it most.

There are a hundred million reasons why the United Airlines New York City Half Marathon was important to me at this time and in this year. Most I just can’t explain. And so the disappointment in the race being cancelled is almost certainly difficult to properly express. The disappointment of the cancellation lives with me. It took me a week to even finish writing this. This was, after all, supposed to be a race recap blog on the day of an event which never happened.

But in some ways that didn’t matter. Despite the lingering disappointment, sadness even, of missing the race, time with friends, and many of the things I love about New York City, the run created its own memories. Its own successes. And it managed to remind me again how much I love that city. I will run that race one day, along the real route. With the real crowds. And maybe the New York Marathon too. Now to just get picked in the lottery for those races.