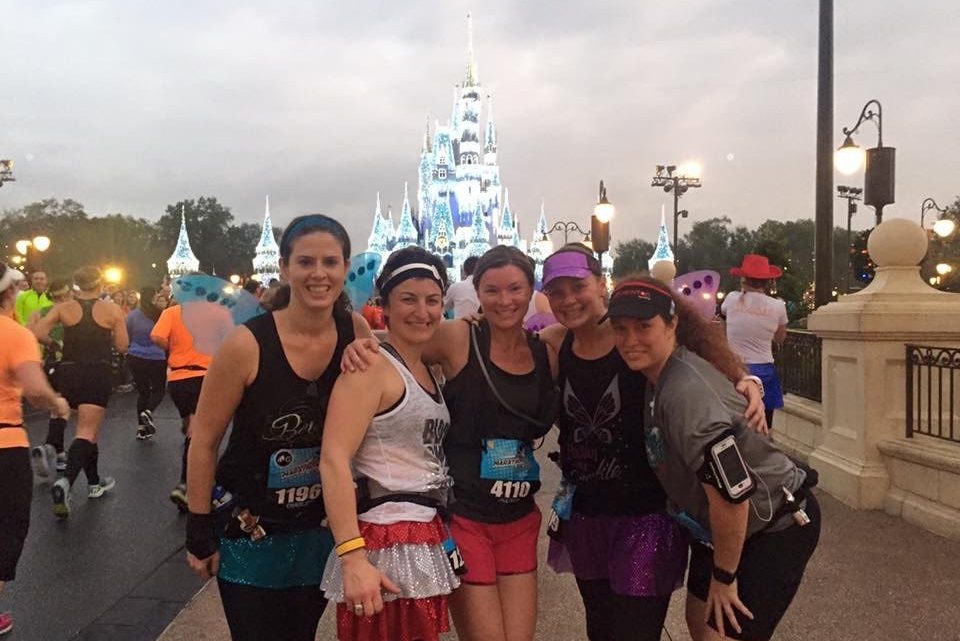 Have you ever met someone for the first time that you instantly connected with?  Someone that you knew you were meant to connect with at that very moment in your life when you needed it the most?  For me, that was my friend Charlotte. She was the first person I met when we moved to Newport, Rhode Island in the summer of 2015.  Her husband had known my significant other since they were in the Coast Guard Academy and shortly upon our arrival in Newport they met us for dinner.  As a military couple, we moved every 1-2 years and had never lived in the same place as Chris and Charlotte until now.

Charlotte and I  hit it off right away!  She was full of life, high energy, and we were the outgoing half of our respective relationships. Before the salads were served she had planted the first seed, ‘I have a running group on Saturday mornings, we are training for the Disney Marathon in January, you should join us.”  My initial response, “I have never run a half, got to the end, and said to myself, I would love to turn around and run back to the beginning… not sure about that.” She smiled and said, “Just come out and meet everyone, run what you can, and we will see how you feel.” A sly smile came across her face and she exchanged quick glances with her husband.  I learned later, that sweet smile was an acknowledgment of her confidence to win me over and soon enough and that she did.

By definition, the word community is a group of people who share something in common.  This group of amazing human beings each had a story, each turned to running for their own personal reasons, and on Saturday mornings, they came together with one shared goal, to cover the distance together.  These men and women not only welcomed me with open arms but it was the first place I felt zero judgment, no expectations of what I “should be able to do”. Everyone was there to be present for the duration of the run and to take in the beautiful town of Newport. Some people drove nearly an hour to meet us and I quickly learned WHY.

I was introduced to the run/walk method and pace groups were determined by something known as the Magic Mile.  We met at Empire Coffee each Saturday, divided up into pace groups, and Charlotte reviewed the route with the pace group leaders.  Once everyone was ready, we laced up and began. We always ran a planned route, sometimes along the beach, other times we ran along the Cliff Walk, down the historic Bellevue Avenue to marvel at the mansions, or some combination of all three.  We always stayed together in small groups, and mile after mile, we laughed, we caught up on the week, and we connected. I know not everyone loves to run with a group but this was a game changer for me. Not only did I run further week over week, I learned how to better fuel my body, to pace myself for distance, I conquered hills I would have avoided if I were to plan my own routes, and I began to look forward to Saturday mornings.

The Summer months came and went, we kept increasing the distance and I finally agreed to pull the trigger and sign up for the Disney Marathon in January of 2016.  We signed up for a few fall races, and used these as training runs. Charlotte and I kept up with a minimum of two short runs each week and then the long run on Saturdays was with the bigger group. Each week, I had mixed emotions about my ability to cover the new distance, but I just kept showing up. I learned to enjoy this new way of being, this new way of running, this beautiful opportunity to connect, and before I knew it, it was race day!

Charlotte and I decided to dress up as fairies for race day, my wings, skirt, and vision was purple and hers were blue.  For those who have experienced a Disney Race, the start is always early and they now average approximately 25,000 runners.  In the moments leading up to the start, I focused on quieting my inner critic and just told myself, one mile at a time.

It only took a few miles before we started to hear the buzz from the other runners … “Follow the fairies”.  Whether it was the smiles and enjoyment of each mile, or the collective group we ran in, our energy was contagious.  We picked up a few strangers who wanted to run with us, and as we continued mile after mile, we started to break up our group into a few smaller clusters, to include our new runner friends.  Everyone always talks about the WALL, so this was something I had in my head as we approached mile 18. In the exact moment that I felt the fear creeping in, a stranger put her hand on my shoulder and with a very exhausted plee, she said, “please take me with you, I don’t know if I can finish.” I thought I was dragging but to her, I was capable!   I decided to get out of my head, and into my heart, finishing was no longer about me. All 25,000 of us came here to accomplish a goal, and I was going to make sure I lead this group across their mental and physical finish line. Charlotte looked over at me, and said, “You got this! “ She dropped back to help a few others and we agreed to meet at the finish.  Mile after mile, I just keep them moving forward. It was like another gear, I was able to push through the pain, the discomfort, and help not one but two strangers to accomplish a goal that just six months ago, I thought was an insane idea!

I am forever grateful for my Newport running community, for my friendship with Charlotte, and for this single accomplishment that ignited something in me, that showed me that I CAN do anything I put my mind and heart into. Later that year, I ran the NYC Marathon, PR’ing by nearly 25 minutes with a little help from my friend Allison who paced me. In 2018, I ran down the east coast with the Ulman Foundation, from Baltimore, MD to Key West, FL to raise money for young adults impacted by cancer.  Running has taught me the power of community and community has taught me that we are always better together!