How Running Is Changing My World 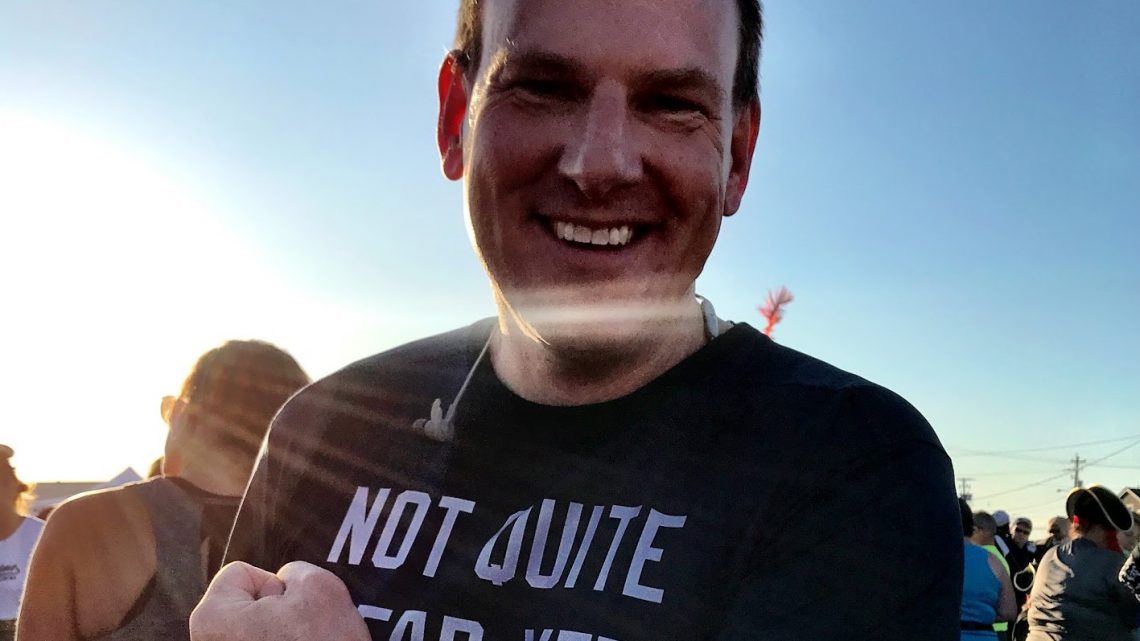 Running is like life. We chase a goal. Run to something. Run from something. There are ups. There are downs. We don’t always know the course. Sometimes we know it all too well. For two years in elementary school, I ran cross country. Later running became part of my flat water kayak training regime. Early in university a friend said “let’s run”. I was 20 and for six months she and I would run five laps once a week around the Halifax Commons in Nova Scotia. Solving all the problems of the world. She left for California. I stopped running.

As I got older, I realized I’d been struggling with occasional depression and anxiety for years. You didn’t do much for it in those days. You were just having an “off” day. Suck it up.

I didn’t see that my running and other physical activity had kept much of the darkness back. As life went on, work would become more and more a priority. Physical activity became almost non-existent. My best friend committed suicide. I spoke at her funeral. I blamed myself and was left in a dark hole for years. I could have saved her, I was certain. I didn’t talk about it. I moved on.

I thought I pulled myself out of it. Travelled the world doing consulting, giving speeches, doing photography, writing, and making documentaries. Work became all consuming. Over the years I’d occasionally move the boxes off a treadmill and run. Or go to a gym (or at least have a membership). But physical activity was a lacklustre and rare process. Even a walk in the park brought an eyeroll of the effort it might entail. This from someone who grew up spending all day in the forest exploring, imagining, and playing, or kayaking, swimming, doing any number of activities.

I got into politics. Or the 13-year prison sentence as I sometimes call it. Politics was strange because I went in believing people could rationally discuss any issue. I felt, as in life, people may not agree in the end, but can and should talk through any conflict or disagreement to understand each other, remain friends and be respectful to one another. Thing is, that isn’t politics. Or, sometimes, life. It was also strange because while I’d hosted TV shows, and given speeches, I actually find being the center of attention an enormously anxious experience. Being on TV or giving a speech is fine, you don’t need to interact, you put on a show – it was acting. I hated having my photo taken or being given accolades. Hated going to doorsteps to sell myself or work a crowd. No one knew the real me. Because all politicians want attention, right? Social media arrived around the same time. I became able to hide in plain sight as others managed the visual social media presence that had very little of the real me or my life. I learned to be ok with it and that has stayed with me, even if my own pictures on social media still make me cringe.

As a government minister I refused to let staff call me “Minister” because I craved being equal and anonymous, not put on some pedestal. The higher we are, the further we can fall. That applies to our own mental health. I remember meeting the Queen and was introduced with a title. I blurted out “It’s just Andrew”. I’m someone who is just as happy to step back and do my own thing or be around the very few people in the world who know me. But that public persona made many think otherwise.

This sort of thing catches up with you. Around 2011 I realized there was an issue. I went to see someone. I was diagnosed with PTSD. Twice. Why twice? I didn’t believe the first diagnosis. Soldiers in battlefields have PTSD. Not me. But as they went through my life they noted assaults I’d been victim of, including a stabbing, my work on an air crash where there were no survivors, work alongside dying children – and adults – as well as child soldiers in Africa. Even the sudden death of my father, and by this point the suicides of two friends (yes it happened again). It was a long list of trauma. I’d blown off each event but in combination it was something.

The impacts on my life were real. Suddenly they had a reason. Over the years it had become very rare for me to trust anyone. It still is. The sudden deaths of people close to me deeply impacted me – frightened me even – forever creating fears those I allow close will abandon me. So I’ve let few get close enough to matter. I learned I can handle almost any situation, but to avoid triggering depression and panic attacks I find it difficult to let issues go without understanding them, and feeling people can move on together in harmony. Otherwise it is always a spiral.

I’m deeply private. Even writing this is difficult but maybe it helps someone else, and that’s the point of being a run ambassador. Repeatedly specialists have told me over the years that one of my challenges is being too empathetic. It hadn’t occurred to me that was even possible. Empathetic to the point where I’ve even refused to physically defend myself when attacked – because I can’t process the idea of using violence to defend myself. It’s not new. When I was a kid I would stop to rescue and nurse back to health wildlife injured or hurt in the yard or forest or feel sick when kids would torture jellyfish along the shore. I routinely ignore my own personal boundaries to help and be there for others, which opens me to feeling taken advantage of, even if that was not what someone intended. Deeply hurting myself.

Then came a particularly bad time in 2015. I was sitting with a race director friend of mine, Stacy Chesnutt, who joked “running fixes everything”. I signed up for a 5k race in my hometown called EPIC. Naively trained for a few days and ran in 12-year old shoes. I set a random goal of finishing in 30 minutes and did so in 28:35. I looked like I would die. I was overweight and just stubborn enough to finish in that time. But something changed.

I realized I could challenge myself. I could race myself, not others. I could do something for myself. Running seemed to be so difficult at times that it made me not able to think of the bad things in my life. Or the things that were going wrong. I signed up for more and more races. And packed on the kilometres. Running became my therapy. Such that when I had a car accident in December of 2018, I felt myself falling. I rapidly gained weight, and felt I’d never get to where I was. Running goals seemed impossible. Work goals didn’t matter as much. Fortunately, people who came to be the closest to me pulled me through it. Dragging me out for runs and encouraging me to sign up for races. And there it was. It wasn’t perfect but it was a start again. My physiotherapist said, “you need to find the joy in running again”. I found that through the many people I lived the running experience with over the past year, rather than the results. As Stacy had said four years before, “Running fixes everything”.

Maybe not everything.  I still have trouble listening to myself when I have panic attacks. Instead, I’ll listen to other people tell me how to solve problems during times like that, sometimes making situations worse, not better. My own voice is often the right one in those situations, but I doubt myself at times like that. I just haven’t quite figured out how to listen to myself, when others scream so loud.

Like running, life continues to be a journey. Some days I’m running away from something. Some days running to something. Sometimes its a struggle. Sometimes a rush of success. Like running a race, I have the highs. But I still suffer the pain. Just like an athlete, the pain of things not going the way I envisioned when I thought everything was settled, planned, and on course for a spectacular finish. I still feel a sadness or pain in ways it feels others don’t really understand. I’ve had people tell me, “just don’t go for that run”. Or “find something else”.

As I traveled this journey finding wellbeing (with all its potholes), I choose to believe everyone is good at heart. We must choose to see that goodness. Too often we focus on the things people do wrong and let that overwhelm our thinking. I believe we should always choose compassion over anger. We must accept that people experience things in ways we might not really understand. We shouldn’t judge.  We have no way to know what is going on for others or what pressures we may be unaware of. I still struggle when people don’t approach situations with the kindness to try to understand that, whether in me, or in other people.

The best way I’ve found to cope with my triggers for mental health struggles, is to strive to remain amicable, and almost always friends, with those I’ve had conflict and misunderstandings with. To take the time. Step back. And agree to put the past behind and move forward. It often surprises people to see who I remain friends with despite challenging pasts. If I choose to hold onto judgement over someone else’s actions at a difficult time, how can I ask them to not hold judgement over me? I can’t. So I choose not to hold grudges. I used to. That always hurt me more and made me a worse person more than it hurt them. So I’ve come to accept my own role in my feelings (and their feelings) and accept others may have felt pain and confusion too. There is a depth of closure and peace which comes with understanding each other. It is a much more harmonious way to live when you have one life to live.